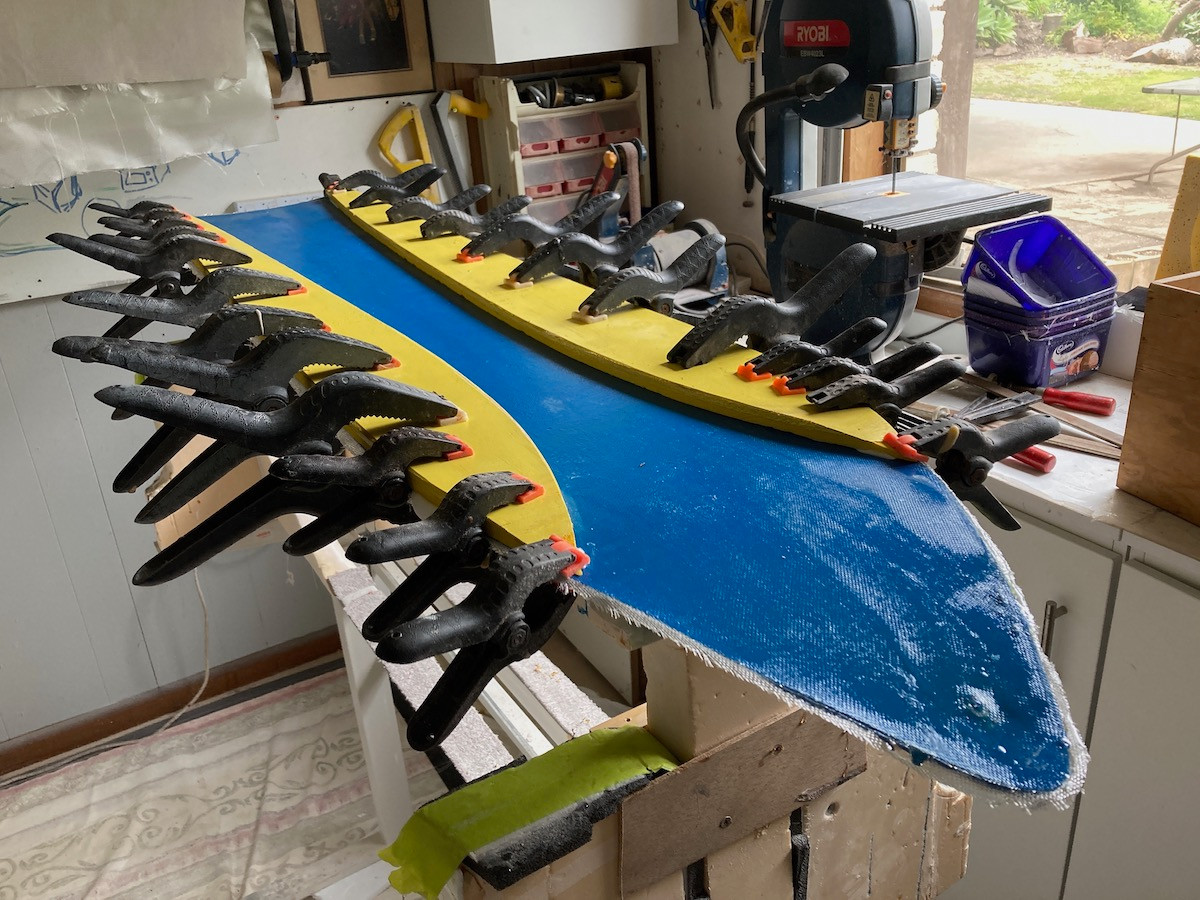 Some of you may remember the story I wrote for Transfer Snowboard Magazine last year about a chance encounter with my now friend and neighbour George Watt, and his late friend Geoff St. George, who were the co-creators of what we believe may have been the first ‘snowboard’ ridden in Australia, “The Snowf”. If you missed it, have a read HERE.

While restrictions, lockdowns and border closures have ruled the spotlight in the year since then, some extra time at home and a slowing down of sorts has allowed many to work on projects more meaningful to them, and of course, closer to home. For George Watt, with the help of myself and local surfboard restorer Nick Bawden, this extra time has culminated in the re-creation of ‘The Snowf’; a board that was once thought long lost, left under the stairs of a lodge in Thredbo in the late 70’s, and a board that now has historical significance to the origins of snowboarding in Australia. 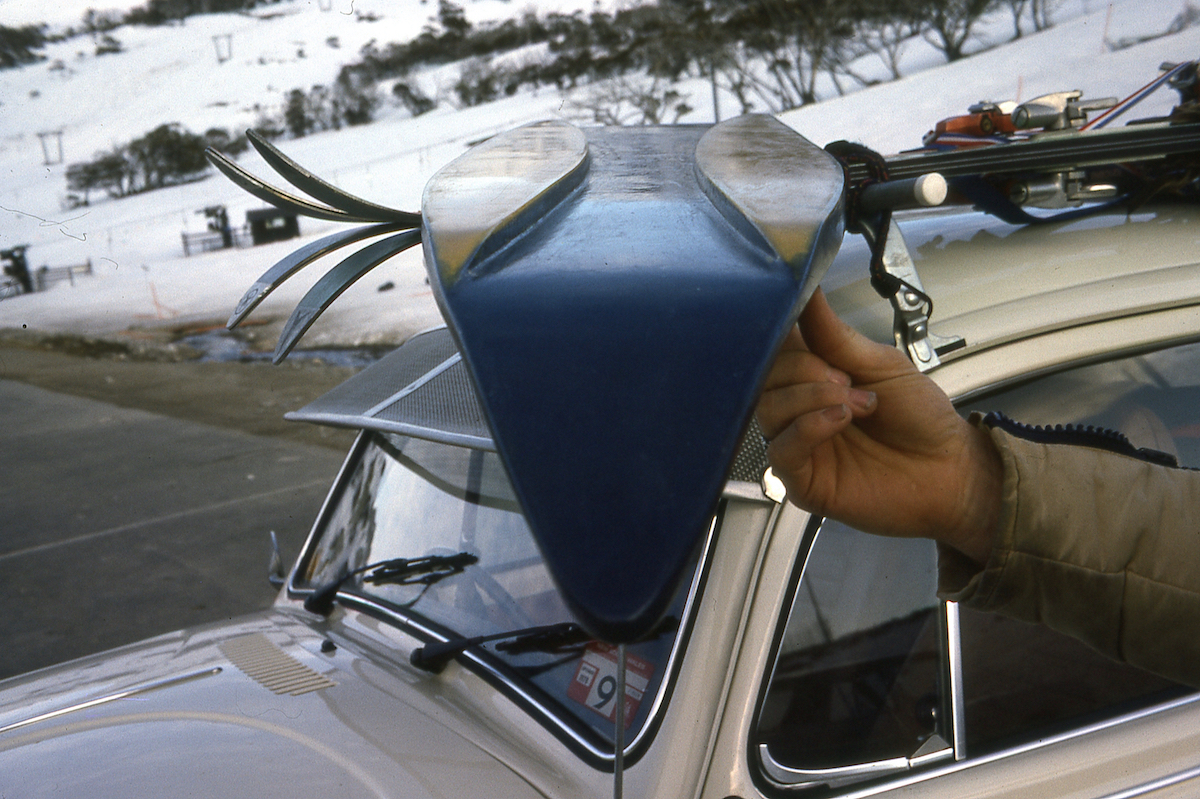 I’m not sure when exactly it was that we decided to re-make The Snowf. I think it was more a gradual progression of conversations between George and I about the original boards' design, its whereabouts, and about what it would feel like to ride it today that pushed the conversation from a "wouldn’t it be cool" to a "let’s do it!".

Once the decision was made, we arranged to link up, and spent an afternoon at my place trying to figure out how we could bring The Snowf to life once again. While George racked his brain to piece together exactly what they used and how they produced the original back in 1978, I provided some insight into how production snowboards are made these days, and about how the different shapes and build materials affect how the board rides. It was decided that we would try to re-make the board as close as we could get it to the original. George knew that they had used foam, fiberglass and resin in the original build, however he was unsure if they had also used other materials to provide added strength. A rough plan was hatched and we called it a night.

With only one photo to work from, and memories 43 years past, we were going to have to use some creative licence for this.

The next afternoon we met we would finalise the dimensions for the board and draft up a scale drawing… With only one photo of the board in existence to work from, figuring out the length, width and thickness of the original was anybody's guess... Then we realised that if we could find the dimensions of the roof of a VW Beetle (the car that the original Snowf sits on top of in the photo [above]), we would be able to get a rough handle on at least how long the original board was, which would be a start.

My first thought was to turn to the internet to look this up, but then I remembered that my next-door neighbour Pete, who restores old Volkswagens, happened to have a classic Beetle sitting in his shed, just up the back of my place. Talk about coincidences! I suggested to George that we go over, and with Petes’ permission, take measurements of the roof of his Beetle and compare them to the original photo. With some disbelief, we walked around to Pete’s front gate and there she was, his classic Beetle, all polished and looking pretty, sitting right there in his yard! He had just finished doing some work to it.  After a few laughs of disbelief from the two of us, and a look of confusion on Petes’ face, the measurements were taken, and we returned to mine and finished up the drawings. 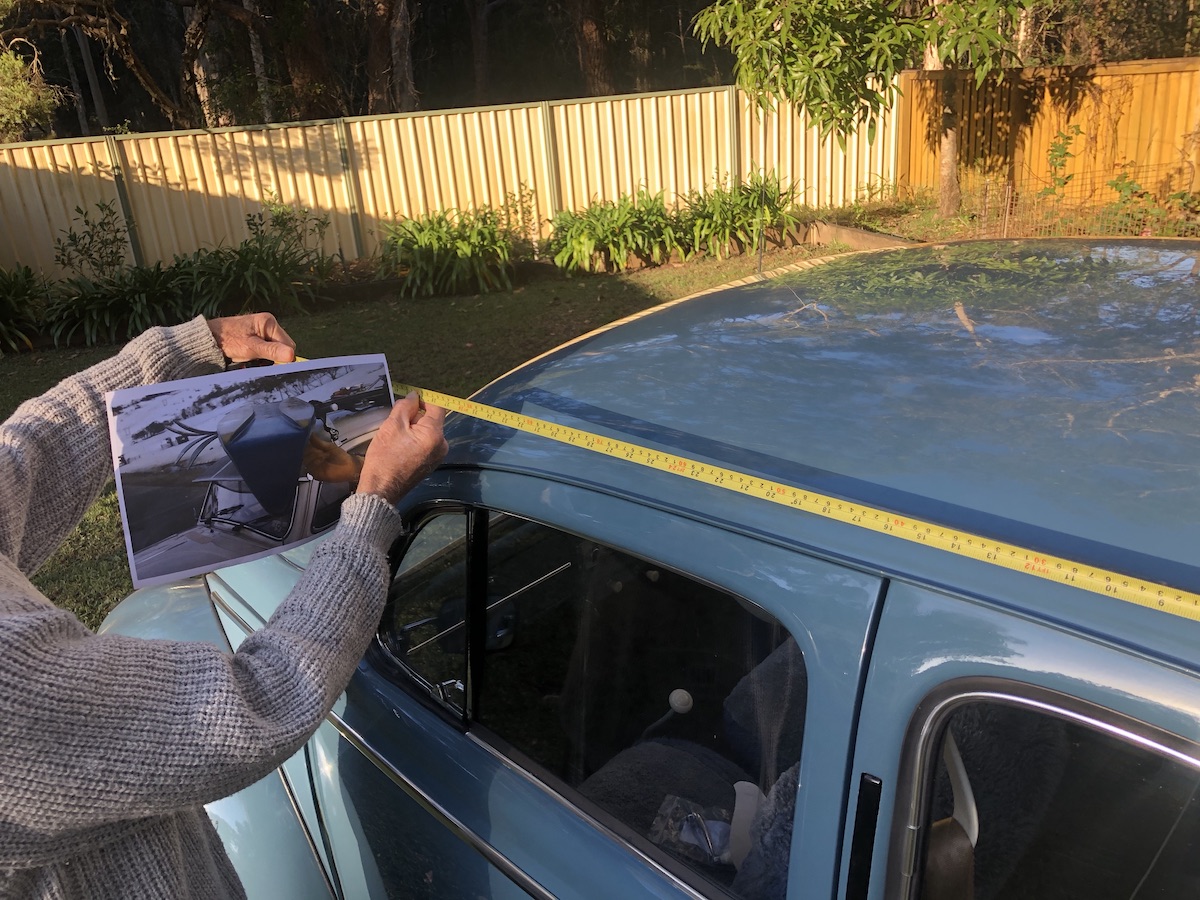 ABOVE: Measurements are made of the VW Beetle's roof.

BELOW: The finished plan drawing, ready for the shaping bay. 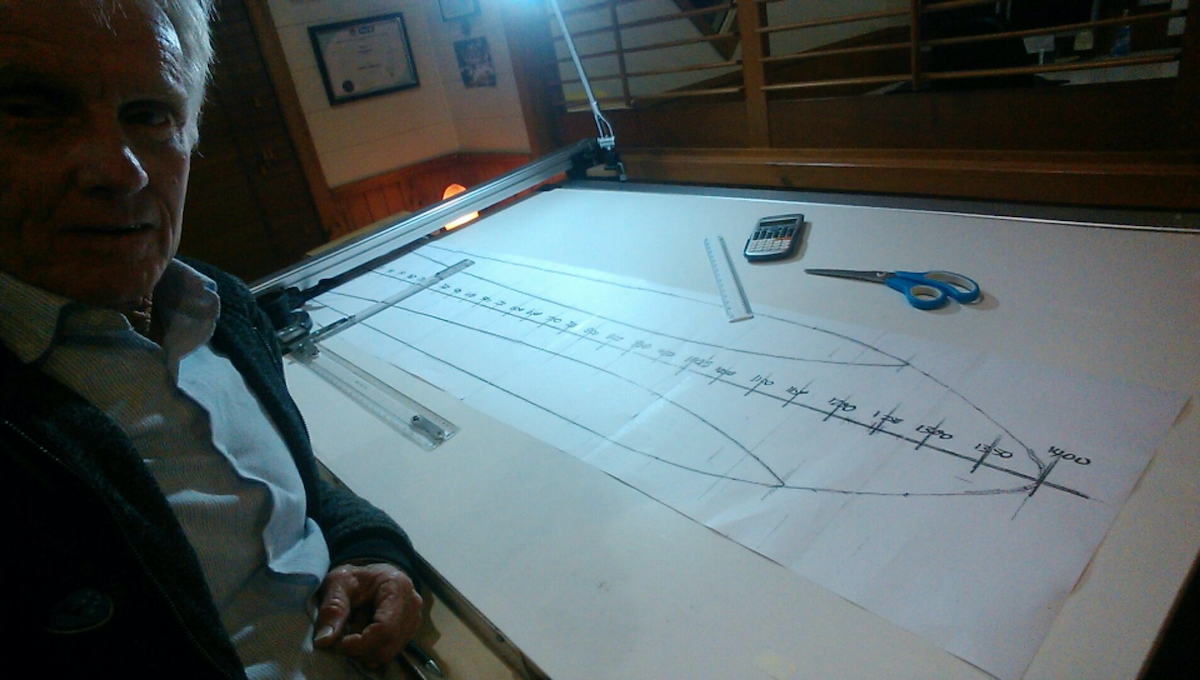 When it came time to decide where we would make The Snowf, it was almost pre-destined. George, being a keen surfer and enthusiast for all things design, had just previously finished shaping his own surfboard with the help of local surfboard restorer, repairer and shaper Nick Bawden. “You know what, we could ask Nick if he'd be interested in helping!”, George said. We made a time to drop by and discuss the project with Nick, and a few days later the three of us were standing there in his shaping bay amongst a sea of surfboards discussing early Australian snowboard design. Intrigued, he agreed to help us out, and also provided some valuable insight into alternative materials that we hadn't considered, which would later become part of the final build. It was quite amazing how things just seemed to line up for this project!

Over the next 3-4 weeks George and Nick “tweaked” the board, until it was as close as they could get it to the original. Initially, the plan was to use only surfboard foam, fiberglass and resin to construct The Snowf, however after some discussion with and guidance from Nick it was decided that plywood would be added to the deck, and also to the bottom layers of the foam ‘edges’, providing increased strength, and also crucially providing the excessive curvature that we needed for the nose. Leather belts would be attached to the top of the board via leash loops constructed of fiberglass and resin to act as bindings and provide some sort of grip when turning. 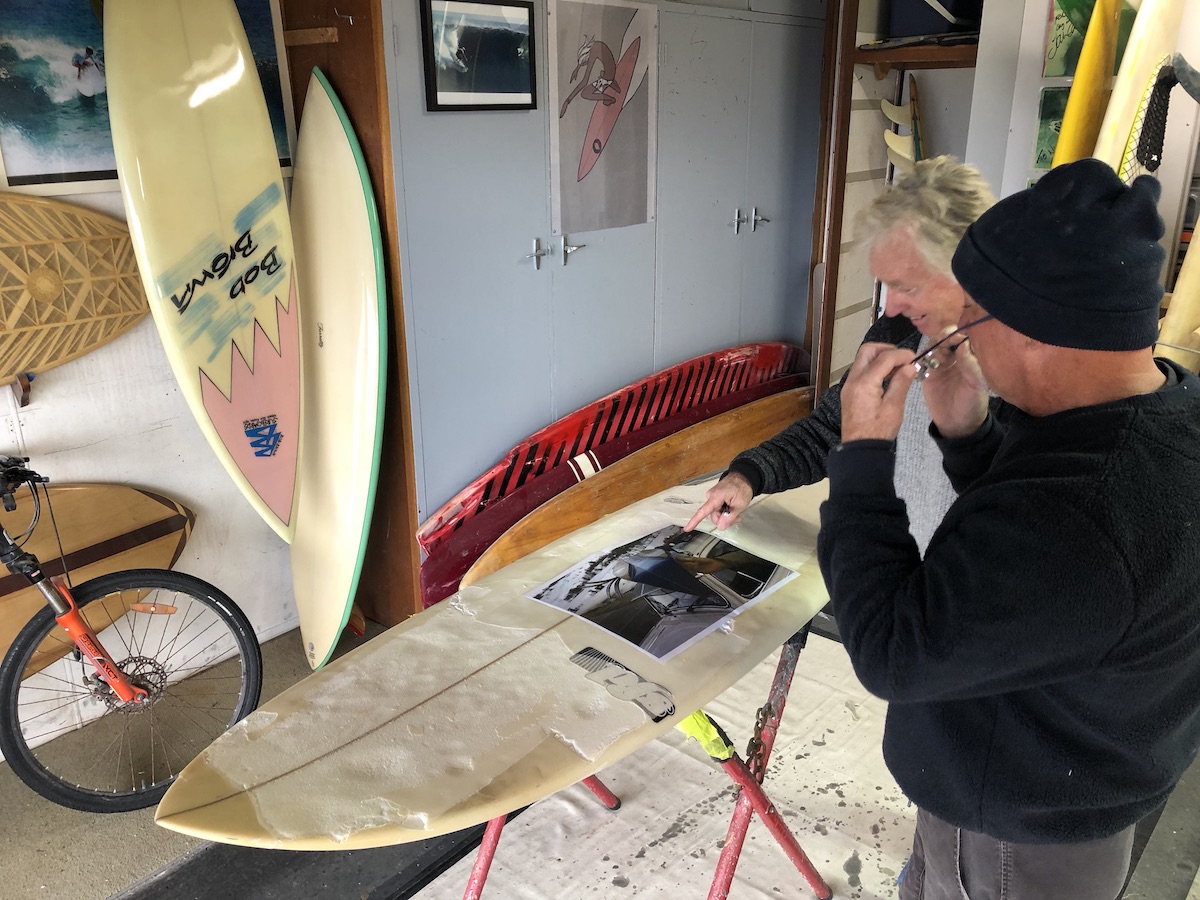 ABOVE: George & Nick discuss the build.

BELOW: The plywood top, after being cut to size and heat treated to achieve the nose rocker. 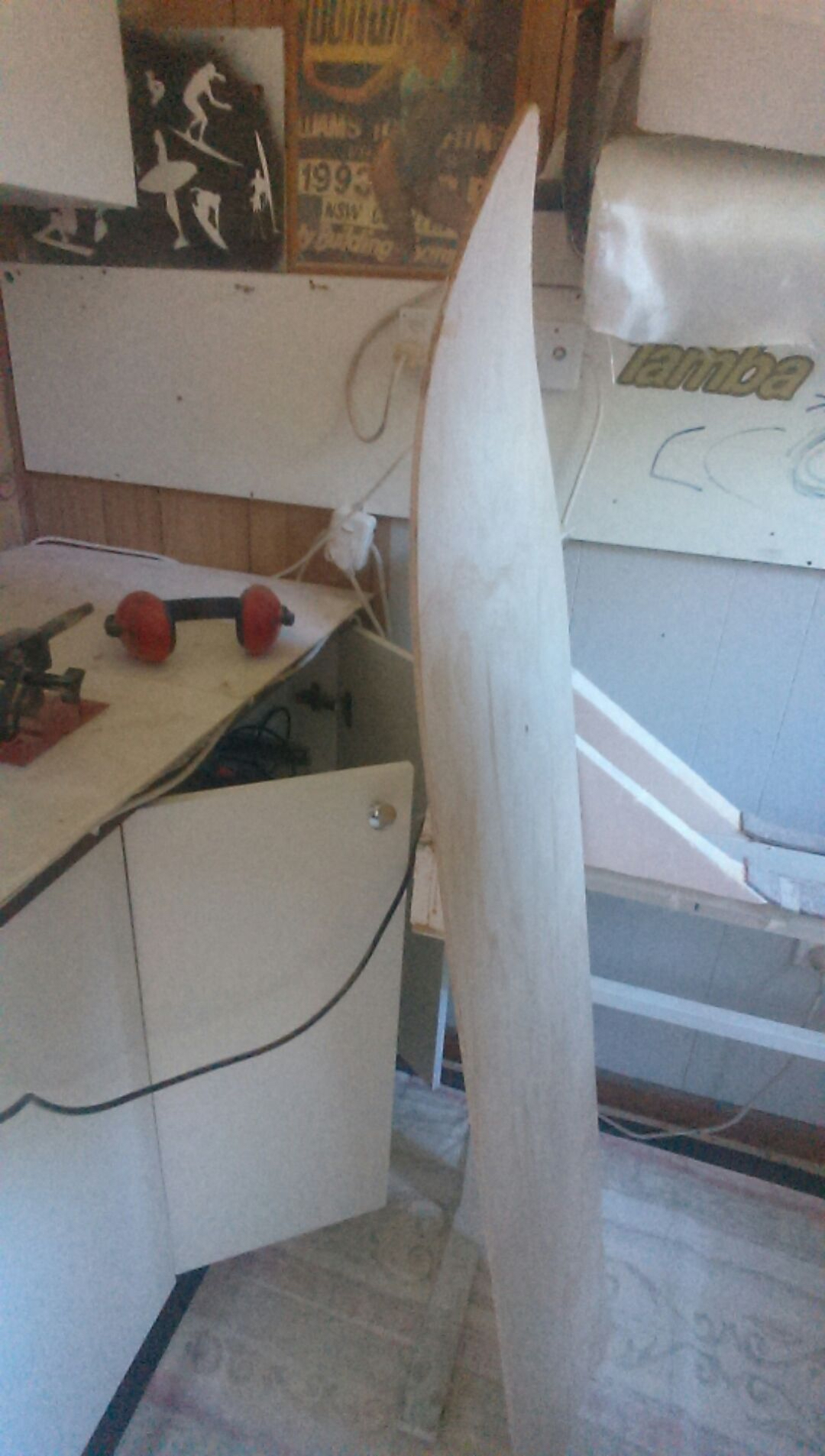 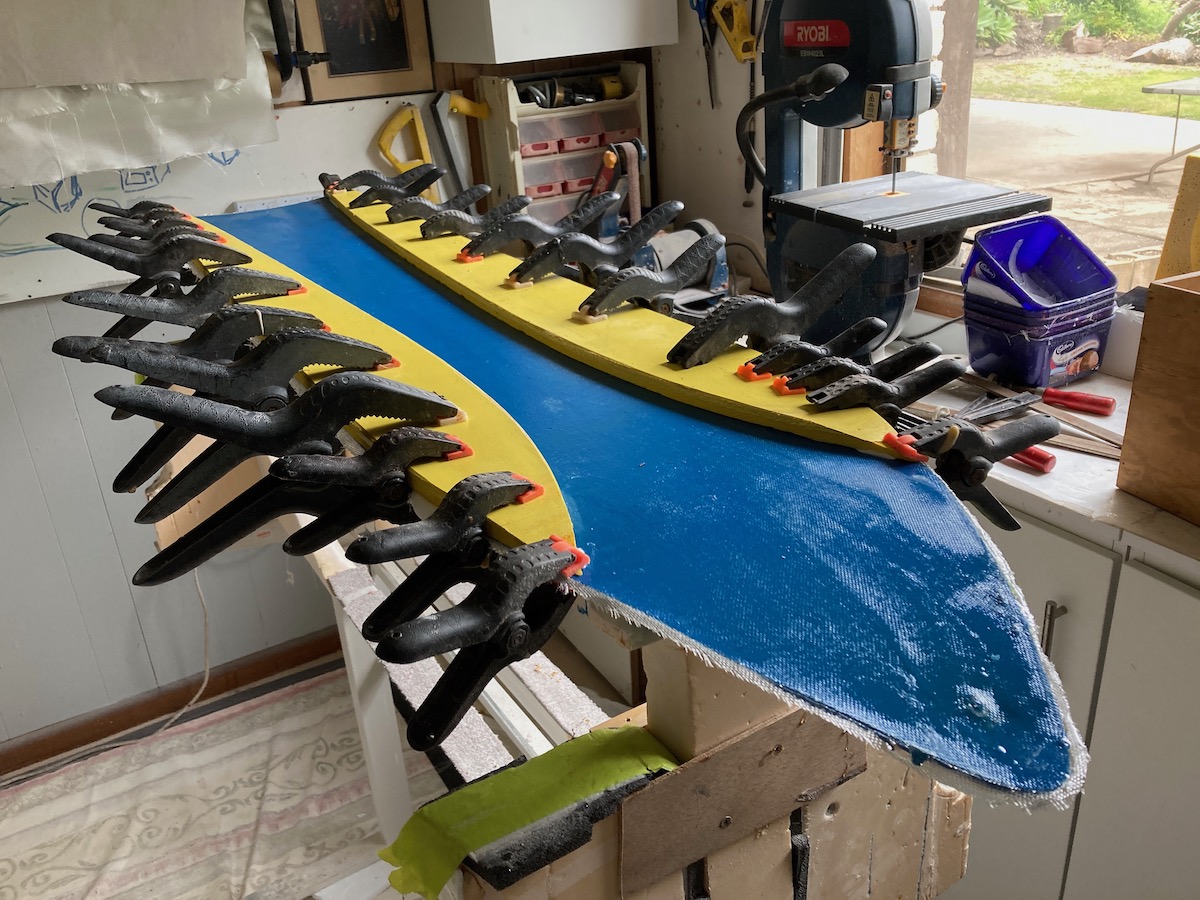 A sandwich of ply, foam, fibreglass and resin setting up.

At this point I hadn’t seen the board myself for a couple of weeks, only receiving updates from George and/or Nick either in the surf, or via text, on the progress of the build. Each time I would get an update from George he seemed more and more stoked on the concept and with with how the board was coming together. At one point, he told me that what had started out as a fun and interesting project for him, had more recently felt like something deeper and more significant, as if he was re-making The Snowf as a tribute to his late friend and the boards co-creator, Geoff St. George. When I heard this I knew that this board, and the entire process, was something special, not just for George, but for me too.

A couple of weeks went by and things had gone a little bit quiet on The Snowf front, until one day George turned up at my front door, with The Snowf slung under his arm. My eyes widened as I opened the door and took my first glance at the finished creation. It was beautiful, and truly depicted what I had imagined the original board to look like. I just had to strap in... Stepping onto the board and tightening the belt loops around my sneakers, I could feel how the thinner, middle section of the board flexed underfoot. This reminded me of the contour of a skateboard from edge to edge, which would make for more foot hold I thought, something we would need with only leather belts to hold us in for the ride. The shape, combined with the set-back binding position and shorter than average length seemed a perfect combination for the powder conditions we were hoping to ride it in. It just felt right. 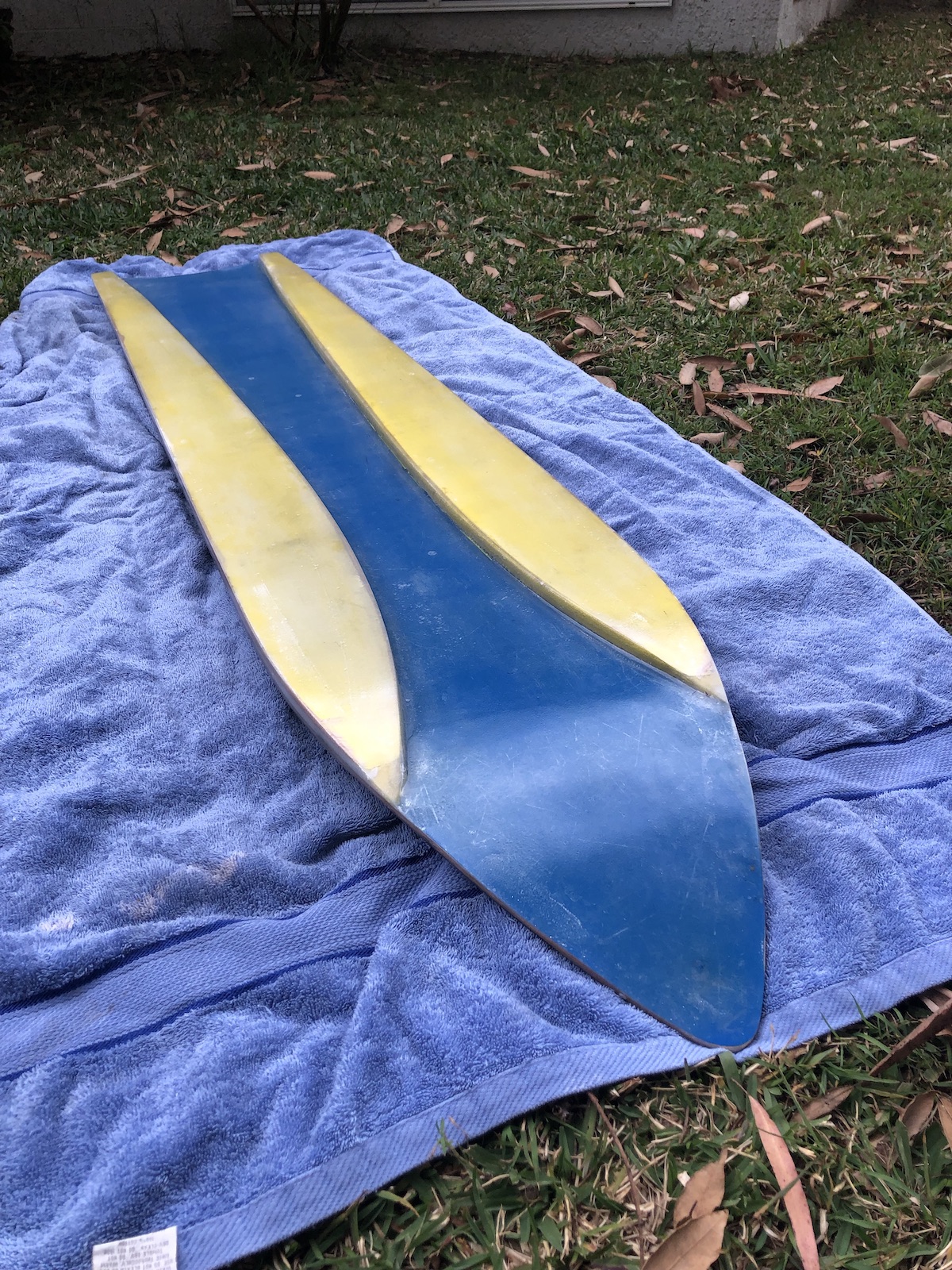 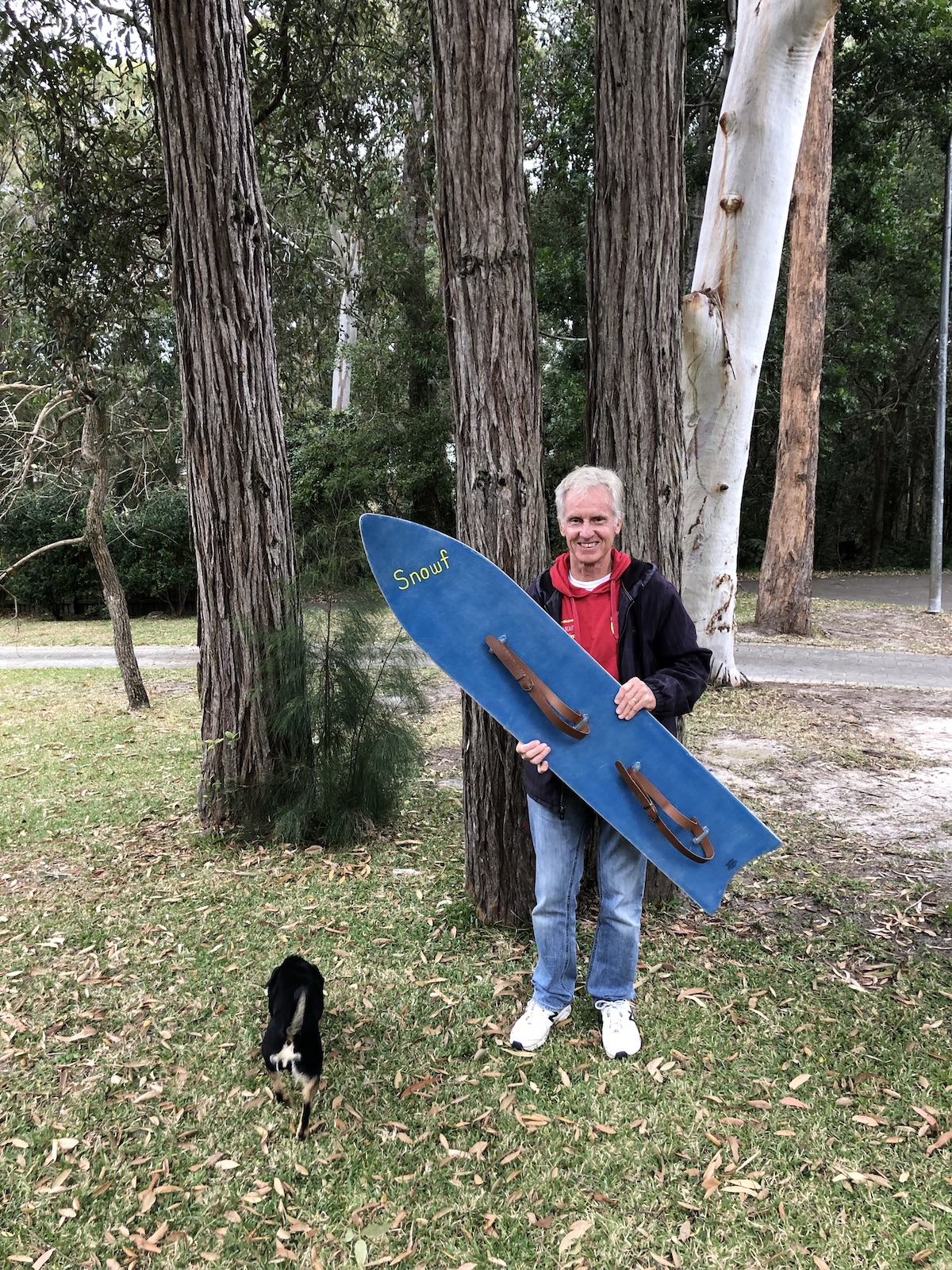 ABOVE: The Snowf, what may have been the first 'snowboard' to have been ridden in Australia, once again in the hands of its original co-creator George Watt, 43 years on.

It was now mid August and The Snowf was once again a reality. The only thing left to do was to ride it! And that’s when our plan went a little bit off track... As regional NSW plunged into lockdown, it was beginning to look less likely that we would be making the trip down to the Snowy Mountains to ride “The Snowf” by the end of Winter 2021… Currently with the NSW snow resorts closed due to restrictions, and travel outside of your local area banned, it’s looking less likely by the day, but, as long as there’s snow on the ground, there’s a chance, and if not, then there’s always next Winter. Whether the board will hang on the wall until then, or take its first slide in 43 years this year we can't be certain, but I’m hanging to find out.

To see something tangible and historical like this come into being has an absolute trip and I'm grateful to have been able to have played my part in the process, and to have met some pretty inspiring people along the way... The 2021 re-make of ‘The Snowf’ stands as a tribute to its co-creator, Geoff St. George, and to a simpler, perhaps more adventurous time, where, as George so conclusively puts it “We weren’t told the consequences, and were given no boundaries”. That sounds like a whole lot of fun to me.